I've been having some trouble finding shows that I feel like watching right now, but I've found a few.

Gakuen Utopia Manabi Straight. Unique show/unique vibe. But it's cute. And fun characters. It's kind of funny getting used to how their bodies are drawn like, boxes or something, I don't know. I've never quite seen characters drawn like this, lol.

Occasionally watching other stuff too, but shows I've already mentioned and where I hold the same opinion as before. Such as "Gochuumon wa usagi desu ka" being a top tier perfect show my god
Murrin-Murrin
Top

Again I am always behind the times so I apologize for it being an oldie, but I just stumbled across "Love, Chunibyo, and other Delusions" on netflix.

The first half (of Season 1) I am thinking, "Ok, this is not nearly as funny as Seitokai no Ichizon"... but it is having its moments, and pretty cute, so I will stick with it.

Then the second half rapidly gets much more serious, and pretty soon is getting into some C. S. Lewis "The Problem of Pain"-level shit. Gonna give myself a day or two to recup, then start in on Season 2.
Avatar by Broken, I changed the book
My rescripts, now with little bits of commentary for each one
Top

Ya, I watched that series as well, Darrin. It starts out rather lighthearted and then you begin to realize what is really going on and your heart starts to break. The animation style completely throws you off at first and you sort of expect something silly and whimsical.....but it doesn't stay that way.
Top

Eraden wrote: ↑
Mon Sep 07, 2020 1:25 am
The animation style completely throws you off at first and you sort of expect something silly and whimsical.....but it doesn't stay that way.

Heh, yes, I loved how at first the "battle" scenes look completely cheesy and overblown, and then you quickly realize it's deliberately cheesy and overblown, with pastiches of Gurren Lagann, FMA, probably a bunch of magical girl stuff I am less familiar with, and dialogue I would swear is riffing off Code Geass at one point.
Avatar by Broken, I changed the book
My rescripts, now with little bits of commentary for each one
Top

I found an excellent 3D Chinese anime to watch: "Carp Reborn".  About a Japanese special-forces guy who is transferred to an alternate ancient Japan, where magic is power and power is everything.  Great translation, but seems Chinese anime always has Chinese subs hardcoded.  There must be 2 major dialects in use in China.  Kinda spoils things to have two subs up at once. It's advertised upfront as "season 1", so hoping for many eps.
Top 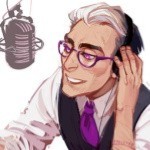 I'm probably not going to watch anything new or contemporary. My housemate and I marathon'd Mobile Suit Gundam: The 08th MS Team on Monday, and we're either going to shift into Gundam 0080: War in the Pocket, or commit to rewatching Wing on BluRay for the first time in (what might be) six years.

It's part of a long-term project to sit down, dredge through the 'classic' catalog and lots of missed shows from the first decade of this century (e.g. Eureka seveN, Serial Experiments Lain, Samurai Champloo, s-CRY-ed, Infinite Ryvius, RahXephon, The Vision of Escaflowne, Last Exile, Blue Sub No.06, etc. etc.).

Nothing's caught my attention this season, and frankly I've been super jaded about watching anything this year since the pacing disaster that was InSpectre.
I am a Stegosaurus; the youngest and sexiest ornithishcian.
Top

Seeing your avy, ForteNoir, I'm surprised that you haven't checked out Wave, Listen to Me!

I'd seen the JP trailer for it and the premise didn't resonate with me. It seems like one of those uniquely-Japanese styles of comedy and comedic delivery. Like I said, I'm not jiving with a lot of what's produced these days. That's why I'm looking back at stuff I should have watched when I was younger, but didn't because of XYZ reasons (also, a recent rewatch of Gundam SEED Destiny via its 10th anniversary remaster has just got me jonesing for pre-2010 stuff anyway).

That said, if Kadokawa produces a new/final season of Full Metal Panic!, or the creative staff behind Death Parade does something new, or Shinichiro Watanabe directs a new series, somebody hit me up. Also waiting for the second half of GitS SAC 2045 to see if the back half of the series can make up for the myriad mistakes of the first half.
I am a Stegosaurus; the youngest and sexiest ornithishcian.
Top

The penultimate episode of Oregairu has aired, and
SpoilerShow
even though I'm on #teamYui, I loved 8man's confession to Yukino.
I'll have to binge this series again after it finishes next week.
My MAL profile, not as a noob, though.....

What better way to bring in 2021 than Horimiya, which is finally getting an anime adaptation? Can't wait!

Finishing up the summer shows....

I think Oregairu S3 could've been better; the show was good at the beginning, was awesome at the end, but the middle six episodes kinda plodded along without much happening. Still, I shall miss it, unless they do an OVA like they did the first two seasons.

Deca-Dence was really good. Animation was great, story took twists and turns, characters(except the tropey evil crow) were mostly more than one dimensional.

I didn't know what to make at first of Appare-Ranman, with all the weird character designs and the Wild West setting(Illinois isn't a desert, just sayin'..

), but it was, on the whole, still fun to watch. One of P.A.'s better shows of the past couple of years.

Fruits Basket S2 finished the emotional wreck it started off, and pretty much the whole way through. The Zodiacs, Akito, and the girls need to all hash this out on Dr. Phil or Jerry Springer or somewhere......

Speaking of PTSD, poor Subaru! Re:Zero spent new and violent ways to off our protagonist, but plot progression was slow.

I think Fire Force S2 was better than the first one; animation standards remained high, the writing was better, and there was less gratuitous fanservice.

A lot of hate toward Uzaki-chan, but not from mr. Granted, it was pretty much a one trick pony, but was fairly entertaing, nonetheless. Went in with low expecrarions, and it delivered.

The last season of Food Wars is trash. That is all.
My MAL profile, not as a noob, though.....

Just watched the latest Made in Abyss movie; it ain't for everybody......

I am watching March Comes a Lion. It's very relaxing and very slice of life. Just like MegaTokyo itself ^_^!
Top
Post Reply
39 posts