In today's episode of Reading the Classics with Cidjen -

(Also: is the 'marry a voice actress' really so big of a trope in manga?)
Translation to polish
and where it happens when I have time to stream

New season! Continuing to watch BNHA and Blade of the Immortal.

Somali and the Forest Spirit is another isekai, I know, but it's done really well, at least the first ep is.

Darwin's Game has good action, but I think it was written by a 14 year old. Short leash.

I bailed out of the 1st ep of Asteroid in Love. Dense MC joining an astronomy, er, Earth Sciences club to find an asteroid for a boy she met once, YEARS AGO so she can name it after him, only to find not only is that person also is in same club, he's actually a she(who blushes). Pass.
My MAL profile, not as a noob, though.....

Madoka Magica Side Story is just OK. Doesn't have the impact of the original....
My MAL profile, not as a noob, though.....

Keep Your Hands Off Eizouken! is off to a very good start! Another masterpiece by Yuasa? We'll see!
My MAL profile, not as a noob, though.....

Bofuri is a low key pile of fluff that's an easy way to spend 25 minutes.

Not sure about Hanako-san. Giving it 3(or whatever).

Finally got around to starting watching Eureka Seven. More comedy than I anticipated...
My MAL profile, not as a noob, though.....

Right now there are no shows that I'm really dedicated to, I'm really just picking up 1 episode here and there for like 20 different shows. But a couple of shows I recently started:

Machikado Mazoku - heard great things about it, and love it. So cute.

Ultimate Otaku Teacher (Denpa Kyoushi) - It's not a show I'm totally crazy over but it's a fun show with a lot of cuteness and fun characters.

Recently finished a bunch of shows:

Sukitte Ii na yo (Say I love you) - very good romance show. Had a lot of well-written stuff IMO and had a lot of profoundly adorable stuff. Had a nice impact on me emotionally in various ways.

Ristorante Paradiso - this was a really nice romance show that had a lot of sweet stuff. And really interesting characters and stories. It was a good show. And it was nice to get a "breath of fresh air" or whatever by seeing a romance show in a completely different setting - the show takes place in Italy, all of the main characters are adults and most of them are much older. So not the stereotype of "high school romance anime in Japan" that you usually see. But it was a really nice show imo.

Noir - if you like cute girls with guns, you'll love this show. It was great. More of a serious action show (rather than the comedy slice of life shows like Sabagebu or Stella C3-bu).

Fuuka - it was a show I really enjoyed, because I really like music shows, I thought the music was really great and I loved it, and there was some nice romance in it. Musically, the storyline was pretty shallow and very unrealistic (more unrealistic than the average anime I think). The romance was pretty good, kind of average good romance or whatever. But I enjoyed the show enough that as soon as I found out there's a prequel, I put it on my plan-to-watch. Probably gonna buy the soundtrack to this show too. Great music.

Chance Pop Session (Chance Triangle Session) - in a lot of ways it was kinda cookie-cutter, but it was still moving and nice to watch. The music storyline was REALLY stereotypical and predictable. But the life storylines were a little better and rather moving at times. I liked the show. It definitely could have gone without the weird music montages though. Almost every episode, there was a really weird pointless 2-minute music montage that in my opinion was just really weird and added nothing to the show, lmao. But still, I did quite enjoy the show as a music lover and sentimental anime lover.

Ramen Daisuki Koizumi-san - this show was so delicious and cute. And the face she makes when she finishes a bowl of ramen... it never gets old. Oh, and I also liked that it's one of the few shows that the VA for one of my all time favorite characters (Takane Shijou - VA Hara Yumi) plays a main character (who happens to be another beautiful calm character).
Murrin-Murrin
Top

if you were reading jk and the foundling...Show 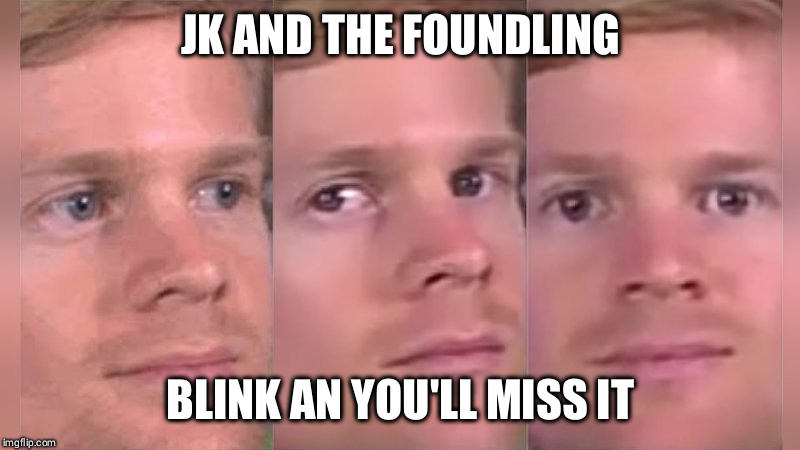 I mean well, given the subject I suspect they couldn't drag it or the publisher got scared... But to end only after 17 chapters....
Translation to polish
and where it happens when I have time to stream

All I've seen of JK so far is 14 chapters; I knew it was only for 17 total, it'll be interesting to see how it plays out when the rest gets scanlated.
My MAL profile, not as a noob, though.....

Ah, I see it now. Pretty predictable, though it was a decent story.
My MAL profile, not as a noob, though.....

Tried the comedy about the graduate students trying to quantify love, but it was so bland, I didn't make it through the first ep. Dropped Hanako-kun and Madoka, too. Eizouken and Somali are the class of this season, to me so far, and Bofuki is decent. Isekai Quartet isn't as strong as the first season; I don't think the Shield Hero characters are helping.
My MAL profile, not as a noob, though.....

nsfwShow
Funny, cringy, and sometimes perverted in equal measure: The Balls of the Elves....

And Henjyo - Hen na Jyoshi Kousei Amaguri Senko is mostly perverted but can't stop laughing.
Translation to polish
and where it happens when I have time to stream

Last quarter
Hey it's not February and I'm already back!

ended up watching a bunch of shows last season but dropped some pretty fast.

Probably will watch quite a bit this season as well, until eventing kills me. backlog-wise, I'm finally almost done with Carole and Tuesday (on Netflix).
Wish there is a better way to track what anime to watch on Netflix that just came out.

As for the new season, no one show really dominates for me, but I'm digging Bofuri and Asteroids I guess. The two animals/fantasy/miscegenation anime sure are a thing. Fate Go is still Going. Runway anime is hella overrated. Heyacamp is OK as well as Nagoya pt2. Obviously enjoying Eizoken (more so out of peer pressure though) and in/spectre. Railgun T is a thing. Any other show worth noting this season?
Top

Watched Paradise Kiss. I liked it, it was a good romance show.

Started watching Air. I really like it so far.
Murrin-Murrin
Top

I wanna be like that couple from A Story About A Grampa And Granma Returned Back To Their Youth (no kidding that's the title) when I get old... even if my own youth wasn't this romantic
Translation to polish
and where it happens when I have time to stream

In today's Rediscover the Classics with chicken... Aargh autocorrect... Cidjen!


Cute girls, writers, illustrators... A lot of shouting, from lack of a better term, writer's and illustrator's battle manga... Ero-manga Sensei... Makes me wanna use some of my own imagination more.

And, in other news, on one hand, Dome X Kano just had a very typical story development but I can see how this is very Atypical for the country it comes from... it's pretty western. But refreshing after miles and miles of other manga pushing the stereotype. So Thumbs up!
Translation to polish
and where it happens when I have time to stream

I just found Spy vs Family today, and I'm binging the 20 chapters. So far, it's really good!
My MAL profile, not as a noob, though.....

I have been followng light novels "My Youth Romantic Comedy Is Wrong, As I Expected" about a high school cynic.  Due to traumatic experiences in middle school, he embraced the role of a loner.  But his teacher made membership in a "service club" mandatory, along with two beautiful girls who were also forced into the club.  Reminds me a little of my high school days, tho the guy is, of course, a lot more rich, clever, interesting, etc. than I ever was.  Oh, and of course no club or beautiful girls

This is not a cheery tale of redemption by any means, but it was pretty good until novel 7.5, which was as lame as its number, full of Janapese trivia, and almost caused me to drop the series.  However, I was bored & got vol. 8, which is excellent, so much so that I signed up for vol. 9, due out in March. Volume 13 is out in Japan.  This series has been adapted as an anime & I see a third season is planned!  Now if they would just make more "Skip Beat" anime!
Top

Yay more snafu to come! Mentally bookmarked.
Translation to polish
and where it happens when I have time to stream

I found From Now On We Begin Ethics and wow it's captivating.
Translation to polish
and where it happens when I have time to stream

I started watching Suzuka, I love it. Nice romance show I've never heard of that happened to fit my tastes perfectly! Found it as a loosely related prequel to another show.

Started watching Okami-san and Her Seven Companions. I really like the characters and stuff and it's fun/cute/interesting. The only thing I don't like is the narration. The narration is really weird imo and at times intrusive and in many ways is a negative part of the show imo. But despite that, everything else is still fun/cool enough that I like the show overall.

Started watching 3-gatsu No Lion, has been highly recommended to my tastes. Looks good and I look forward to it.
Murrin-Murrin
Top

It ended harshly and sadly after 17 chapters. Ouff. I wasn't expecting that (however thinking about it, it's probably expected of it that way)

I just stumbled on Oversimplified SCP-239 tell me that is not Moeko?!
Translation to polish
and where it happens when I have time to stream

Started watching Nichijou - i can see why clips from this show on YouTube have millions of views - this show is really something else. Cute, funny, and very unique... and well made. And a side note, very interesting to have extensive use of full orchestra for the soundtrack to a cute girl comedy/silly/lighthearted show... gives the show an even more unique personality.
Murrin-Murrin
Top

I didn't think much of it, but somehow, I got enchanted by The Ancient Magus' Bride... It's kinda like... The Fiancee of a Wizard but different setting, darker (and unordinarily for a Japanese manga, set on and rooted in European tales). Also, Ethics did not end... it was just an arc. looking forward to more. Or more like.
Translation to polish
and where it happens when I have time to stream