Delta had a lot of issues, but I still liked it.

Though, I also didn't mind Macross 7 that much either, and that killed the franchise for over a decade...

There's always hope the next one will recapture the magic I guess. (But I'm of the opinion Delta is the new 7....)

There were a lot of elements I liked about Delta, and the episode 1 Halation the War scene got me incredibly hyped. Unfortunately they spent a lot of the show doing a whole lot of nothing. Which is what really frustrates me about Delta - I wanted to like it more and wanted it to be better but it was ultimately kinda half arsed.

Isekai Shokudou is amusing enough though I wonder if it'll hold up.
Top

Tsuki ga Kirei was, for me, the best show of the spring; any show that has me shouting at the screen, and watching it twice is rare.

Still watching Sakura Quest and Boku no Hero Acadamia. Only thing on my wish list so far this summer New Game S2 and Made in Abyss.
My MAL profile, not as a noob, though.....

I was meaning to read the Ballroom e Youkoso manga at some point but well, I kept putting it off and now the anime is out. Which is quite nice. I guess I'll roll with the anime for now.

Gave Youkai Apartment no Yuuga na Nichijou a look. Not impressed so far, seems mediocre. Might not even watch episode 2.

Tsurezure Children is cute, just like the manga.
Top


First I'd heard of it, surprisingly enough. But I'm glad that they're still around and kicking. I won't get my hopes up too high, but just like anything that says Nanoha on it, I'll probably watch it anyways.

I mean, I kind of owe it to them after sticking through all of 7.

The first episode of Fox Spirit Matchmakers did not impress me. The characters are laughable without being amusing. Even the competent ones seem bufoonish, and competence seems to have definitely lowered its standarads with this show. The action took the term "over the top" and went over the top with it. No one has anything endearing about them at all. But I've got a rule to watch at least three episodes before I ditch something, so maybe it'll get better.

Netsuzou Trap, however, already has me intrigued. The episode is really short (only 9 minutes), and given the nature of some of the content I find myself worried that it has been censored. (They did that with Sister New Devil, and as a result a substantial bit of important exposition was lost, making later episodes confusing as hell. Censoring things is really my personal bugaboo.) The focal point figure is clearly finding herself in an interesting situation. A slightly aggressive boyfriend, and a female best friend that really pushes the boundaries? Bring it.

Still waiting for the first episode of A Centaur's Life to be posted. (Sheesh). I've read some of the manga, so I expect the show to be good.

Even though I've watched all four seasons of RWBY as they came out I have to admit to being tempted to watch 1-3 in Japanese. It's available on Crunchyroll. Could be fun.

I haven't seen anything else that grabs my attentions, so I may go back and watch something from the past that I missed the first go around. I try to have about five shows a season going (Essentially, an episode a day for me).
Maaaaaaan. Now I need to start winning posts again.

Fate/Apocrypha didn't give a lot more than the premise of the show, and frankly, it was boring.

I hope Aho Girl turns out to be insanely funny like Sabagebu! instead of being a lame ass one joke show.

Restaurant to Another World has potential, but it is rather slow-paced.

Made in Abyss is my favorite new show this season, by far. Most excellent!

New Game S2 takes up where the last one left off.

Yokai Apartment is wait and see. Exorcist girl is cute, though.
My MAL profile, not as a noob, though.....

Ballroom: Gonna get compared to Yuri on Ice at every turn and thus ruin the experience maybe
Knights Magic: Fun robot show so far
Aho Girl: Tsugumomo should have been like this, but eh so far
Made in Abyss: Kurata's got another winner
Fate/A: It's pretty fun so far
Centur's Life: it's interesting, compared to the other monster girls anime
Conbini BF: I should finish tsukigakirei...
NTR Trap: Just eroi I guess
Tsure Dure: It's okay, I should finish tsukigakirei
Cheer Fruits: I watched one ep and fell asleep, will try again lol
Restaurant: I'm going to get tired of this fast, but it's hiding its cards now.
Angel's 3P: 69bu for rock and roll, a winner in my book I guess.

still so many to catch up
Top

Gamers is on the 3ep trial; not good enough to say it's a keeper, but not bad enough to chuck it to the curb.
My MAL profile, not as a noob, though.....

Gamers is okay...
Princess Principal is lols, but this is good chuu2
New Game !! is sure New Game !.

Been trying to finish FAGirls. I guess it's pretty much what it advertises.
Top

Knights & Magic
Loving it so far. The mecha are my favorite part of the show.


Considering adding RWBY to my queue now that it's getting a crossover game with Blazblue.
Top

So far this season:
Keepers:
Made in Abyss: My first choice for "Anime of the season".
Aho Girl: Dumb fun. But with Yoshiko, how could it NOT be dumb?
Isekai Shokudou: Way different, but that's cool. Waiting to see where this one goes.
New Game 2: Meet the new game, same as the old game. And that's a good thing.
Tsurezure Children: Not high art, but the first 5 minutes of ep2 are epic. "She's trolling me!"
Tenshi no 3P!: A(moderately) guilty pleasure. Think Ro-Kyu-Bu!, but with music.....and a seriously Brocon little sister.

Maybe....
Nora to Oujo to Noraneko Heart: On the 3 ep chopping block.
Isekai wa Smartphone to Tomo ni: Same as above.
Gamers!: Same as above.
Youkoso Jitsuryoku Shijou Shugi no Kyoushitsu e: Same aas above

Oh Hell No:
Koi to Uso: Dropped. Unlikeable plot and characters.
Keppeki Danshi! Aoyama-kun: Dropped. Low budget Sakamoto....with OCD.
Hajimete no Gal: Dropped.....No, Thrown down, stomped on, burned, and shoved into the garbage. So stupid, it made my brain hurt,
Top

Thanks. I just watched the first episode of Tenshi no 3P and really liked it.

There was some really good detailing at the start of the performance, actually matching the track. It fell off a bit later, but still an A for effort.

Hajimete no Gal is actually interesting enough to keep watching in my book for some reason. I guess we'll see where this goes.
Top 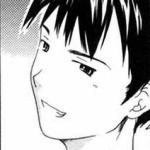 I'm not watching anything new this season.
I gave centaur ... something or other a shot and it just seems pointless.
Top

A Centaur's Life is just what it says on the tin: a slice of life show. There's no overarching plot, no master villain, no big romance, just the cute daily lives of a group of girls centered around a centaur named Princess. It's not everybody's thing. I'm finding it fun, but that's a personal taste thing.

Fox Spirit Matchmaker, however, is headed for the dustbin. I just can't sympathize with anyone in it. None of them are smart enough to get my notice. (I know, I know, that makes me sound snobbish. But seriously, if being STUPID is actually how the plot gets resolved I just. Can't. TAKE IT.)
Maaaaaaan. Now I need to start winning posts again.

Dumped Fate/Apocrypha; Animation was good, but that's about it.
My MAL profile, not as a noob, though.....

I would argue the animation isn't even good. It does flashy stuff, but is kinda floaty and insubstantial and super inconsistent.
Top

Finished FAGirls, it was okay. Watched it because I was curious about Aberika and the other character voices... if you can get past the annoying.

Reflected is uhh... i guess why I don't like comics? It is interesting from a certain perspective but the animation is way too abstract for mainstream I think.
Top

Gundam ZZ is now available on the official Gundam YouTube channel. Never seen it till now, and it's officially one of my favorites from the franchise. Tomino may not know it (because all his later works still miss the comedic mark), but he had perfected a unique brand of humour in this series. I do hear that the second half of the series gets serious/melodramatic, though.
Top

I've seen Gundam ZZ available on the Gundam YouTube channel a while back, but despite the title saying it was subbed - it wasn't. Looks like there's CC subs now, I should check that out. It's one of the few remaining Gundams I have yet to watch, along with Wing.
Top

Yeah they just switched to soft subs. Way more resource-efficient now--they used to have 4 or 5 versions of the same series, with different hard subs.
Top

Owarimonogatari 2nd Season is now out. I wish they they hadn't done the eps at 43 minutes; the show is so dense, I found myself getting tired and dozing off after 25 minutes.
My MAL profile, not as a noob, though.....

I fell asleep halfway through both episodes and had to resume them after an hour plus of napping.

Good to see Hachikuji again at any rate.
Top

Picked up Gamers!!, and it's not terrible. Kind of a weird spin on the romcom formula, but it's at least watchable.
Top

Halfway though the season.....

Finished Owarimonogatari S2; if you've watched the other monogatari(I haven't, so it's hard to get a grip on things without some background research), then I think you'll really like it. I had to stop and read the "flash texts" a lot to get a handle on what's going on. All in all, it's done really well, and I recommend it, even if one hasn't watched all the other monogataris first.(Though I personally have no desire to watch the others)

Made in Abyss needs to have a second season. No way is it going to finish the story by episode 13. Still the best show this season.

My Hero Acadamia has gotten a lot better this cour.

Gamers is doing the "Great misunderstandings, hilarity ensues" thing. For the most part, it does it well, though at times the gag wears thin.

Youkai Apartment would be a lot better if they never introduced the Hase character in the first place. I understand he's the MC's only friend, but still.....

Sakura Quest is simply as boring as the town it's set in. The girls are likable enough, but Shirobako it ain't.

Restaurant to Another World? Lather. Rinse. Repeat. Every single episode. Oh, sometimes the customers argue over how their meal is the best one served in the restaurant. That's about it for drama. Watching it out of habit, nothing more.
My MAL profile, not as a noob, though.....