BetaCygnus wrote: ↑
Mon Aug 13, 2018 4:04 pm
Perhaps I have missed the cymbalism — I might be taking things at face value too much, but… Am I missing something?

Read her shirt, Zildigan cymbals
No Matter Where You Go, There You Are
Top

BetaCygnus wrote: ↑
Mon Aug 13, 2018 4:04 pm
Uhm… I would still quote that same comic to point at a number of ninja that were dismissed by grandma with that same hand gesture and expression to take none other than Miho to — of all places — The Foxhole. And here we are…

Although it could be the flowers hovering and lack of the person who had some in their hair are mere coincidence. Or the artist just felt like randomly drawing flowers in air and it signifies nothing. These sorts of things appear unlikely though.

I'd say it's safe to say that flowers suddenly drifting down in the air is a shortcut signifying the people who had them in their hair are moving quickly or being moved quickly. Said flowers leaving hair much like somebody getting yoinked might leave behind their shoes etc.

Which either way all together gives the impression Miho went to go rescue Yaku, putting it either at higher importance than talking to Piro, or that the scenario where she's supposedly going to talk to him has been replaced by this scenario instead.
Top

Otakon is back on a successful track and trend once again... I am cautiously optimistic.
...

What is all this , then?
Top

What is all this , then?

Ashe, who is a cousin to both Sawatari Megumi and Sawatari Komugishi is intent on confronting a man who texted Junko previously to facilitate an enjo kosai meet up

Ping is currently in The Foxhole being counseled by Megu

Coincidentally this particular love hotel is being used by Piro and Nanasawa Kimiko to engage in massive, hardcore, animal sex in a room themed for a volcanic eruption... highly suggestive isn't it?

I hope that this helped
Top

So are we sure that was Miho who leveled the ninjas? I don't recall seeing a flower in her hair. And one of the ninjas in panel 7 seems to have scrawled an 'S' on the ground. Perhaps this was someone else? If it is Miho, then it looks like she's found her inner m0h, and is looking to take over the story again to suit her purposes.

Waitaminit, isn't the guy sitting at the table Junko's dad? I don't think they would be meeting up as part of an Enjo Kosai date.

Maybe I've been away on vacation too long this summer and have to do some more back-reading to make sense of it all...
Top 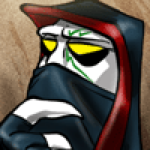 While I could say a few things about this page, I cannot, as I am in awe looking at the art. I keep forgetting how good Fred is at doing perspective, and the background details and fabric textures are amazing.
Top

Maybe I've been away on vacation too long this summer and have to do some more back-reading to make sense of it all...

Yeah, looks like that would be a wise choice. =D


Roborat wrote: ↑
Tue Aug 14, 2018 3:07 pm
While I could say a few things about this page, I cannot, as I am in awe looking at the art. I keep forgetting how good Fred is at doing perspective, and the background details and fabric textures are amazing.

Initial B wrote: ↑
Tue Aug 14, 2018 12:57 pm
So are we sure that was Miho who leveled the ninjas? I don't recall seeing a flower in her hair. And one of the ninjas in panel 7 seems to have scrawled an 'S' on the ground. Perhaps this was someone else?

Ashe is showing a decent range of facial expressions here, going from calm to angry to surprised within a few panels. It's no Yakugashi or Mugi yet, but it's certainly getting there. Which makes me wonder... how does a deaf foxgirl go "ahrii~"?

I am pretty sure the "flowers and petals" thing is just a generic ninjaspeed thing, as it is visible when they take Miho away.


Waitaminit, isn't the guy sitting at the table Junko's dad? I don't think they would be meeting up as part of an Enjo Kosai date.

No, that's Junko's date that Ping left there before entering The Foxhole.
Top

Way off on a sidetrack… in this comic, Ashe strongly reminds me of Flora — a character from one of my once beloved childhood series, ‘Jayce and the Wheeled Warriors’.

Somebody surprising, somewhat expected, just not today 1507
Who seemingly is held in higher regard, but Ping apparently decides to substitute anyway 1508

There are indications whoever this guy is may know this is an EDS 1522
He seems to be letting her lead, but she's missing content 1523
She leaves him at the coffee shop so she can figure things out 1524

In one context Miho said she wanted to see Piro 1527
Or at least go to where Piro was 1528
But then Yaku is absconded with, Miho is none too happy at the context switch 1529

Kind of a weird backward S. Is it part of something being held, a string something laying there perhaps. The finger does seem to be writing though, but lots of them have weird hand shapes. ?

But given 1529 the flowers in air is a Miho going elsewhere thing, and those elsewhering her there seem to be on the ground here, leaving few alternatives as to where the flower came from or what it signifies. As we have been seeing, Miho has not appeared to have lost all of her abilities, even if some/many seem constrained by the narrative or others in it. Although that probably wouldn't preclude somebody else having showed up, taken out the ninja, and removed Miho to another place again. Plenty of potential there.

We have the flower, whose it probably is, but not if it came out of the hair because of something Miho herself did. Even if that seems the most likely answer at this point, who can be sure.
Top

Hmmmm….could be nude photos, nude videos, or worse. Tokyo isn't free from that sort of thing, either, I suspect.
The Rapierman: Intelligence with a sword and a smile.
Top

Perhaps he's looking for the next "idol", and Junko catches his eye as a possible candidate? If you think about it, she's the only major or semi-major character in MT without some sort of superlative trait. Maybe she can sing?
My MAL profile, not as a noob, though.....

Except Junko's superlative trait was already established quite some time ago. Junko having such an additional ability would be another unexplained (or at least unforshadowed) coincidence, without providing any explanation for why the Old Man[*] recognizes Ping and knows how to handle her.

[*] I have been calling him "Old Guy" for several discussion threads now, but I just decided I like Old Man better (it's what Ping called him

).
Avatar by Broken, I changed the book
My rescripts, now with little bits of commentary for each one
Top

I thought that was a kusari.

I kinda looks like there are more ninja girls that ninja boys... judging from the KOed ninja squad. Is it granny 9 tales or a trusted underboss? Odd, but I have the feeling it was only one person that booted all these ninja heads.
...
NINJA!
Top

The person that booted them in the head would be Miho. Why would old 8 tails be going after Miho's escort rather than storming the ninja compound in an effort to spring Yaku?

Piro and Kimi would know where Miho is but at the moment they're involved in knockin' boots, bumping uglies , making the beast with two backs. i.e. massive hardcore animal sex, to be concerned about getting someone to go after Miho and we've all seen that Megumi has other things on her mind. Not the least of which wasn NOT being invited in for some hot three way action with Piro and Kimi....

So, unless Junpei decided to go check on things, something that's highly unlikely as Ninja Grandmother would probably be sending him out to cut the switch she'll be using to tan his backside...the only person left to kick Ninja ass is Miho

Face facts, Miho is at the scene, she has motive, and she's a lot more powerful than I suspect Ninja Grrl has estimated
Top

I can't help but wonder if the whole "hostage scenario" is really a head-fake by granny ninjagirl to help break Miho out of her "avatar" status by making her a player (protagonist) instead of the game being played. i.e. by taking an active role again, she writes her own story. Granted, I have no possible motive for her to do that.

It is not foul Miho to the rescue... she is no hero.
Top

Teddy, Teddy, Teddy... Miho has already *been* a hero in this story. Once when she saved Kimiko from Ed's killball and also when she allowed herself to be destroyed by Ed's killballs in order to remove herself from the story so that Piro could have a relationship with Kimiko. So, once through an actual heroic act and once through self sacrifice.

I guess you really do hate Miho...
Top

I guess you really do hate Miho...