I found I couldn't resolve the Moeko moment, so for anyone else having difficulty here it is... 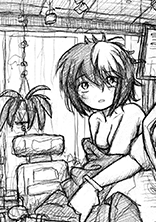 I took it as Largo giving notice that he won't be a part of anything aimed at "saving" Miho.

Miho's "roles" are always confusing because her trope can be realized in a story without her having any direct involvement. In this case I'm suggesting she did get on to the project, either as a step up from the Irish girl role or as a new recruit for the lead once Erika quit.

There is a lot which I think needs to be sorted out. The apparent SD consensus that Miho=Kotone just does not hang together. All of that Irish girl story was cast as "what if..." by Miho, and IMHO was a way to get her own self-dramatized fantasy backstory into play to gain sympathy from Kimiko. Why ...

Re: The Graveyard of Moderated Posts~roleplay always welcomed!

Or turn off the grill for a bit.

Good spot. I had originally assumed it was Yuki's given the preceding mention of her damage stats.

When I first read "kinda jelly" in the previous strip it reminded me of Ririka's language.

None of which seems to contradict my main point, which was that it is Erika rather then Largo who is under the 'fluence here.

It is entirely possible that Largo is the most grounded person in the room at this point. Now there's a first!

Apart from my ongoing separate worlds theory (which I think this strip strongly supports), I think you guys have it backwards. Largo is not filtering out "reality", not is Moeko blinding him. She is dominating Erika, probably with the aid of the connection established by Girl Phase. Most of what we ...

Erika looks really scary to me. Very much not herself.

Re: One WIP Twitch thread to rule them all [SPOILERS]

Oooh. Sounds angry to me.

Does anyone else think that Ping looks really creepy in panel 7?

Maybe she does. AFAIK we do not know anything about Yaku's father other than he ain't around. Given that she is a twin-tail there may well be Kitsune heritage on both sides. Also, when breeding is difficult, you would expect that any child would be a cause for rejoicing. Yet Mugi was given a hard ti...

That might suggest that there only is one tail, but it has two trinary quantum numbers. The trick is to avoid entanglement.

Re: [1548] the less appealing parts of her personality

Or he could be "Great Engineer" Gero in the same way that we have "Great Teacher" Largo.

Re: [1548] the less appealing parts of her personality

Also what's up with the random casualties in the background? Those are the Ninja who were escorting Miho to the Foxhole [1529] . Ashe stepped around them on her way out to meet Dr Gero [1532] . Presumably some have already regained consciousness and crawled away, so these are the few that are left....

OK the "mistakenly" is not quite 100% established yet, but the rest is needed to make sense of the Foxhole interlude.

I would add "mistakenly believing it to be an enjo kōsai date" before the last comma.

What I'm trying to point out is that there's a big bandwagon rolling because of Ping's misapprehension. I'm not saying he's a particularly nice guy, but there still seems to be a determination to see him in the worst possible light. As to the farming of the interviews, a similar situation exists in ...

Even if he's not actually interested in doing anything with all these girls, he's still willing to be seen in public with them - with all the negative social reactions that he'll get from others because of it. If he's that obsessive about his work, I'm willing to stipulate he's at least minor-leagu...

Re: WTF is going on here

Tohya's insta-support on the next page is superb, too.
Search found 23 matches • Page 1 of 1